I’ve been starting a collaboration with Serif for the Affinity product line since October. The first application released has been Affinity Designer, and I can say fearlessly that it is the best combination of vector/raster tools ever made. 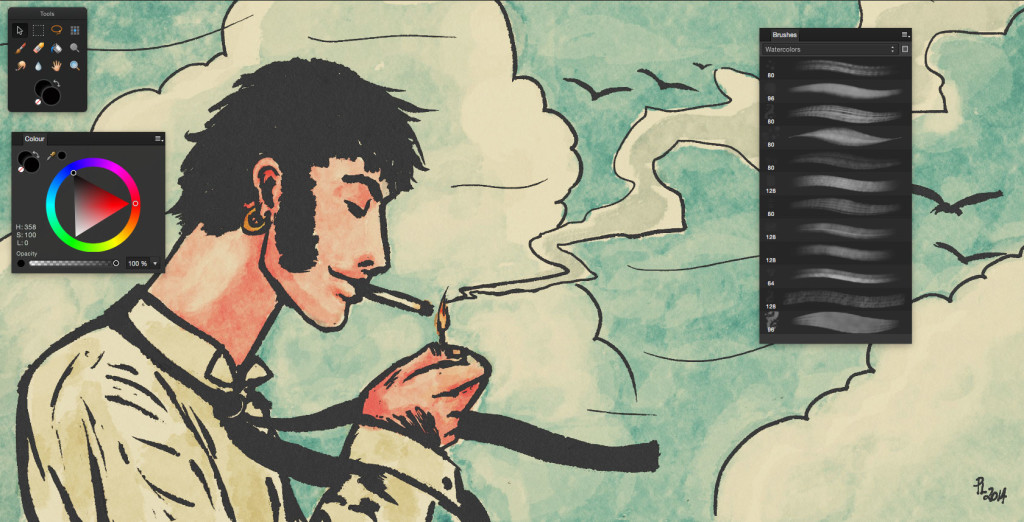 A watercolour painting done from scratch entirely in Affinity Designer. Brushes used here are designed by me and will be released with Affinity Photo.

A BIT OF HISTORY…

Crawling back to the past we can find different approaches to this challenging chimera: painting tools and vector stuff within the same app, working seamless like a charm. Leaving apart the super weird OLE embedding approach of Win 3.11/ Win 95 ages (anyone remember how painful was an instance of Photo-Paint within Corel Draw? Brrr…), the most consistent and effective app had been probably Deneba Canvas which is still on sale in the niche of GIS Mapping and Technical Illustration after Deneba acquisition by ACDSystem. Canvas never really arose as deserved, some features where terrific (eg. Photoshop plugins real time rendering on resolution change) but the raster approach was quite tricky. Another milestone in this territory was placed by CreatureHouse Expression 2 after leaving the Fractal Design umbrella: the best vector painting experience of the years 2000 with some hints of a promising raster engine. Unfortunately it was acquired, crippled and buried with love by Microsoft with the intent of creating its own media design suite for Silverlight technology… Same plot with Altamira Composer some years before… RIP both.

After years of R&D Serif found the most rational and effective way to blend vector editing and natural media painting together. The UI is unobtrusive and sleek: vector and raster tools are confined in their respective personas. This term is pretty famous among UX designers, consider it as a “container” that offers different functions and palettes contextual to the respective scenario. This means that you can switch between these two worlds easily, leaving respective and typical use cases untouched. Really clever and elegant. For example Brush tool will work in Vector Persona as in any other vector app so you can select nodes, vary width etc… In the Pixel Persona will act as a raster tool with the traditional settings available in raster apps.  And to work you don’t need to declare or set anything: bitmap areas, previous rasterization of the working layer and other tricky things belong to the past: AD will do the dirty job for you!

What impressed me most was the speed and fluidity of the painting engine, both raster and vector one. 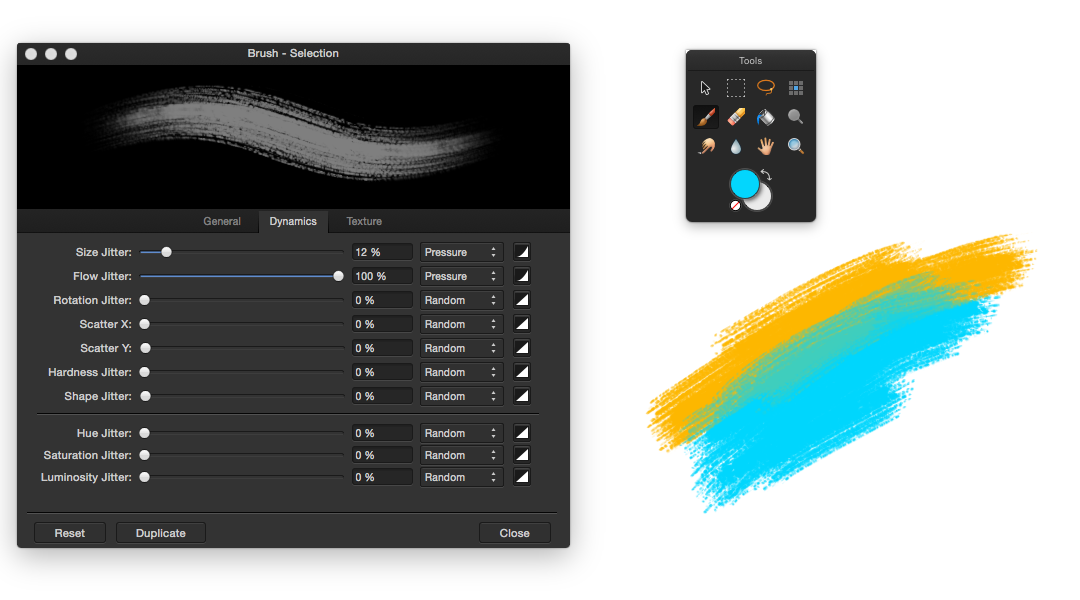 AD can handle 16bit per channel pictures and brushes up to 1024px size without compromises in speed. Color mixing is still missing but will be one of the main features of the upcoming AffinityPhoto, anyway you can produce almost any kind of media available playing with dynamics and blending modes. 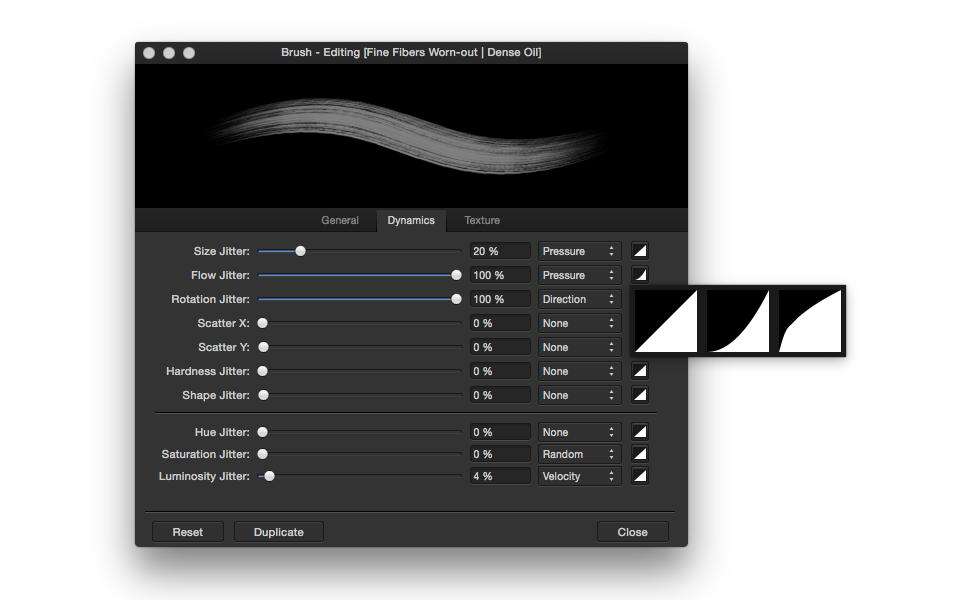 The Brush settings palette seems a bit minimal, but hides lots of opportunities: allows Multiple nozzles (nibs, dabs, tips…) that cannot be controlled independently (such as with Dual Brush in Photoshop) but can as numerous as we want, without any loss of performance. This approach gives strokes a unique randomness. There are lots of Dynamics options too, linkable to pen settings (including Axis Rotation) and relative response curve: a super feature which is still missing from most “main stream” professional tools (excluding Clip Studio Paint which has the state of art of tablet customization).

AD has a powerful Painting Vector engine too, which inherits its model from the Windows brother DrawPlus, but with a terrific responsiveness and speed compared to. Bitmap captures can be mapped to any curve (freehand, pen, shapes…) and respond to pen pressure for size and opacity (as in the Pixel Persona). You can mix easily raster tools to cut of part of vectors in a non destructive approach (raster tools creates in realtime an alpha channel which wraps your shapes). This is the vector set I recently crafted, re-creating the look of some tools available in my former DAUB sets. 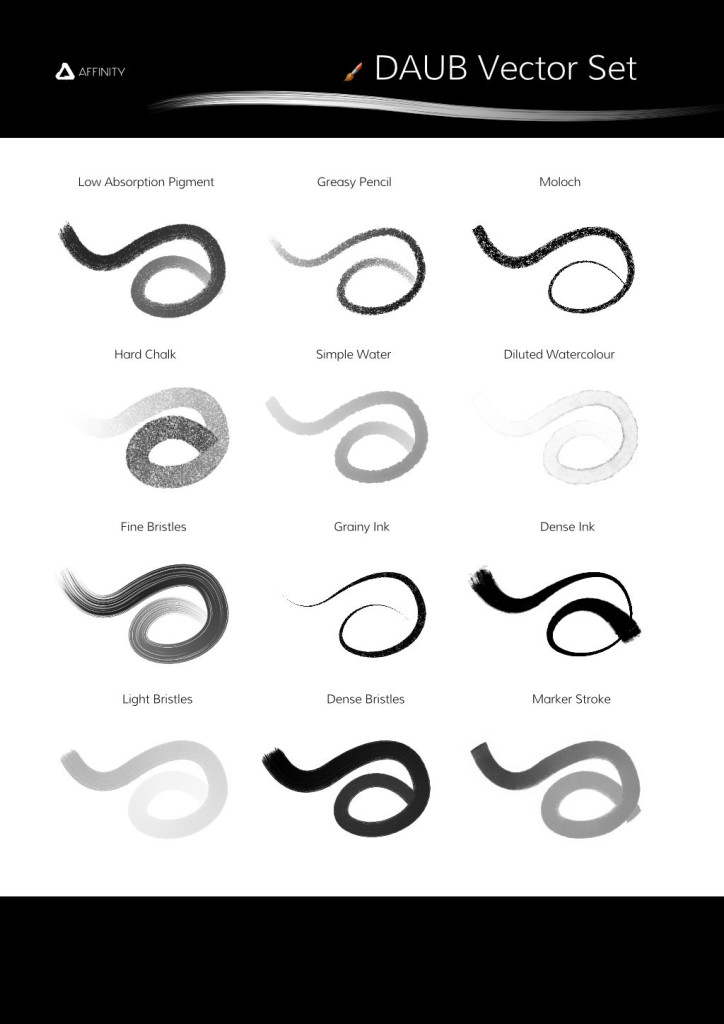 Stroke sheet of my set for AD

You’ll find DAUB Vector Set for free in the first Affinity eZine issue which is free itself too! Happy painting!